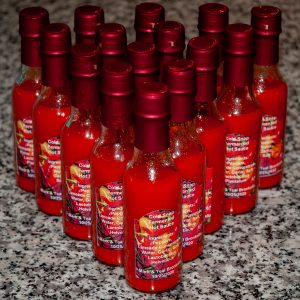 Every few years I make some fermented hot sauce.   We call it “Cold Snap” hot sauce as we harvest the ripe peppers at the time of the first frost.   I greatly prefer to use ripe peppers rather than green for the flavor as well as the color.  A few green ones do get included but […]

I have searched for years to find a good Eggplant Caponata recipe.  This was started when I was looking for something similar to my Grandma Ann’s  Antipasto recipe but without the tuna and not quite as difficult to make.  What I have found in italian markets and specialty grocers never comes close. Hers was a […]

Background Last year, was our first try making these treats. They were an instant hit. However, with only 12 half pints we had to conserve the supply for family gatherings and parties. Even people that are not pepper aficionados will go for these (except for my wife Teal).  The original recipe from Foodiewithfamily.com was modified […]

One of our favorites is Blueberry Banana bread. Whether mid-summer with fresh picked berries (like today) or thawed berries from the freezer, it is delicious. Today we tried a new variation substituting apple sauce instead of the shortening. The result was even more flavorful AND the blueberries were evenly distributed, rather than weighted towards the […]

At this point the printer isl making more parts for itself. Teal (my wife) compared it to Frankenstein adding his own parts after he had an arm attached. One of the first part sets was to make a case and mount for the display. The case turned out quite well, but the design of the […] 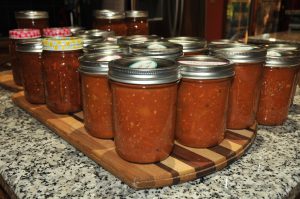