Spring has arrived and it is time to make more pink beer.  I am further refining the technique and materials.  I like doing this as a double size batch (10 gal) due to the extra time and steps involved. Plus I want to try adding marshmallow flavoring to half Kettle sour 5 gal water 12 […] 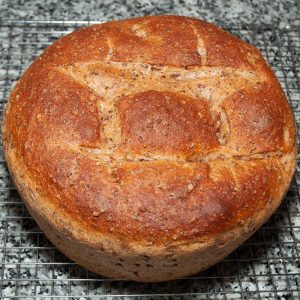 I have been experimenting more with sourdough breads and have made a few more variants of the spent grain sourdough.  I think this is a bit simpler.  I have been baking every week or every other so the 2 step starter feeding is not necessary. When choosing your grains for the sourdough, consider that the […]

As I mentioned in one of my previous posts: Down the rabbit hole of sour beer , I have begun experimenting with sour beers and alternate fermentation methods. The first was the Backyard Berry Sour (Pink Beer) which will now be a staple of the beer selections. It is a kettle soured beer with lots of […]

With a little planning ahead a brewing day can also be a baking day.   I  am doing extract brewing and the spent specialty grains are perfect for baking.   The cooked grains are rich in fiber, have lower carbs and add great texture (yes, even with the husks present). Given that many of my beers are […]

Down the rabbit hole of sour beer

Over time I have had a few sour beers,  but I had not done much exploration of the genre. After the success of the Backyard Berry Sour a.k.a. Pink Beer, I wanted to explore them more broadly. Unfortunately, Wisconsin is seemingly  not on the sour beer  distribution web  (if one exists). A few trips out […]

My first experiment with sour beers was a kettle soured beer with fruit. It proved to be very popular and resulted in another 2 batches being made this past summer. Kettle souring is a “safe” technique in that it uses cultured lactic acid bacteria in the wort before the boil. The boil  kills the bacteria […]

Like many of my brews this started with a kit – Northern Brewer Plinian Legacy. This is a “clone” of the impossible to find in Wisconsin, Russian River Pliny The Elder . I wanted a very strong Imperial IPA so I also added to the kit an additional pound of golden DME at the start […]

When we built the house I had a utility sink put in the basement shop. It has served well over the years but the lack of a counter-top and ugly old file cabinets for tool storage coupled with being a cold area in the winter due to the walls being half exposed, it was time […]