Our family has really gotten into wakeboarding. It is a fun family activity and is compatible with the weekend speed limits (25mph) on the local lakes. Unlike skiing where you may have wanted to limit the number of passengers on some boats to improve hole shot or reduce the wake, with wakeboarding, "the more the merrier" is the rule. More people provide more weight and a bigger wake. With the Riviera, there is no shortage of power, so we try to load it up whenever possible.

Last year we had a chance to ride with some fiend sthat had an extended pylon on a Mastercraft Prostar. The pylon made for MUCH easier starts and for higher and longer jumps. While I had made some provisions for a pylon when building the deck framing, I had held off adding a pylon until using one as I was not sure if it was of benefit or just sales hype.

The pylon we settled on is a 2 piece all stainless stell unit from Barefoot International. I like the look and stiffness of the stainless tubing. Having a 2 piece unit makes it easier to stow away when not in use. For a normal installation, the pylon slips over the center ski tow pylon of a competition inboard ski boat. A cable and strap system then wraps around the bow and attaches to the bow winch eye. Well, neither of these are available on our boat. This would NOT be a normal installation.

The pylon mounts through the deck between the engine hatch and middle seat. This area is not very wide and with the forces that are applied, I wanted to be sure that the deck would not deflect and possibly crack. Additionally, the bottom nounting point needs to be very rigid. With the long lever arm and the deck openming acting as a pivot point, there are several hundred of pounds of force applied to the lower mount.

When I built the deck framing, a large box beam was included in the construction. It is approximately 5 inches tall (height of raised deck beams) by 6 inches wide. In the right hand photo, the lowest piece is the deck frame at the back of the cockpit. The iddle piece is the frame for the hatch opening.

Looking down through the opening, you can se the thickness of the reinforced deck as well as the bottom of the beam. The inside of the box was not coated with epoxy. This area needs to either be coated (not really possible at this point) or sealed off. I chose to seal it off with a fiberglass tube.

The pylon fits into a piece of schedule 80 PVC pipe. This makes alignment with the lower mounting bracket easy. The PVC pipe was used as a mold form for the fiberglass tube. The tube was made with some scrap 4 oz cloth. It is 2 layers thick. The left photo shows the tube wrapped with paper and wax paper. The wax paper acts as a release agent. The paper acts as a spacer that will allow the PVC pipe to slide in and out of the fiberglass tube easily. The tube was epoxied into the deck opening. This provides a watertight seal for the interior of the box beam.

The lower mounting bracket takes a lot of stress from the pylon. Not wanting to have the pylon break free and smash into the front of the engine or the back of the middle seat, I probably overbuilt the bracket pieces. The mounting bracket was made in 3 major sections. The right and left uprights are mounted onto the stringers. They bolt to the stringer via the same bolts that mount the stringer to the frame. The original bolts were extended with long hex nuts that are commonly used for joining secions of "all-thread" rod.

The opening is finished off with a removable stainless deck plate. 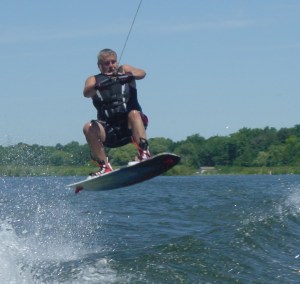 The pylon is great improvement. We get more air and now we can consistently clear the wake. It is easier to start due to the upward pull. It is quicker and easier to get the line to the boarder in the water when circling with the boat.

We also added "Side Sacks" which provide 500lbs of water ballast and increase the wake size. This is very nice when we are lightly loaded as we often have only have 2 or 3 people in the boat. Wakeboarding is a social event more people in the boat make for more fun as well as a larger wake The sides Sacks are a nother Barefoot International prodct. They were chosen due to thier relatively narrow shape and do not substantially interfere with bard and ski storage.

Here I am, coming in for a landing on the far side of the wake. 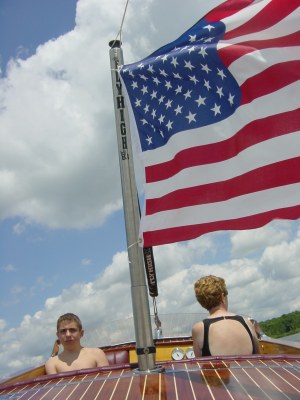 For the Fourth of July we used the pylon as an oversized flag pole. The bow light has a socket for little flag, but we never got one to stay in reliably. The pylon worked our very well with a full size flag.

We got a lot of favorable comments from other boaters.Our boat certainly had the largest flag on the lake that weekend.

Even though the pylon mounting pieces are removable, I thought it would be prudent to replace the water pump impeller prior to installing the bracket. Last season the pump did not always easily prime and I suspected some damage and had orderd a replacement. The PCM engines use a crankshaft mounted raw water pump. When I pulled the front cover off, the impeller blades looked fine as far as I could see in. No visible damage, but I figured I would go ahead withthe replacement anyway. Once I pulled the impeller out (which was a bit of a struggle), I found that the rear halves of a number of the fins were missing!. No wonder it did not always prime and start drawing water nicely. It was a good thing it was replaced.