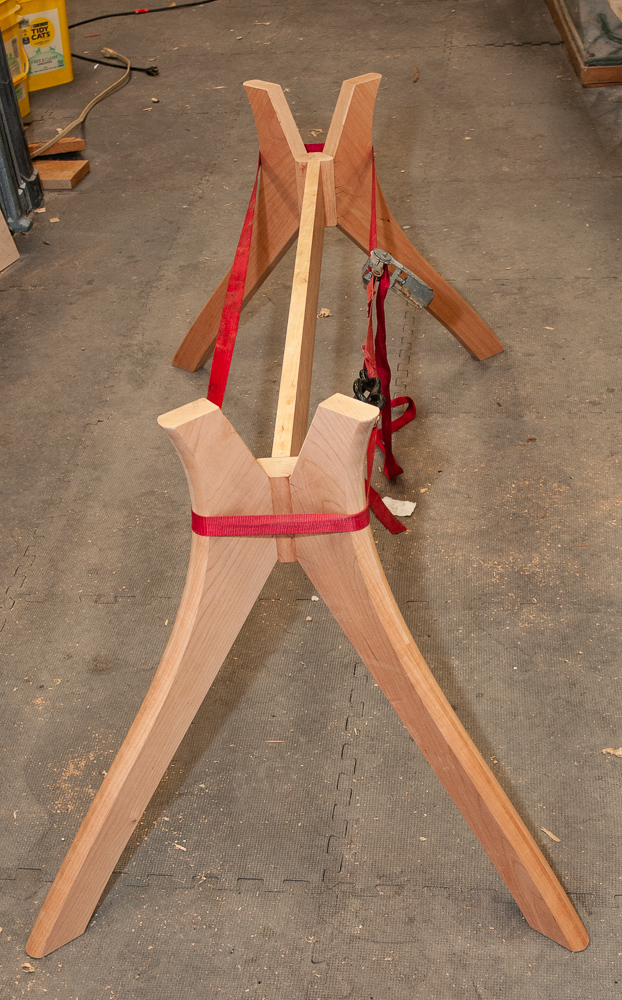 The table was modeled completely in Sketchup. This helps to not just plan the work but then I can export individual components such as the legs as input for the CNC router.

The leg component was exported and then imported into vCarve Pro which I use to model items for the CNC router. I was able to fit 2 legs per plank, working around any defects in the wood I had. During the preparation of the profiles to cut tabs are added and adjusted. These will hold the leg in place during the final pass at full depth. I also set it to take the last pass slightly smaller to do a full hight clean up of the leg profile so there are no lines visible form the individual passes. I used a 1/2″ diameter 3″ cutting length solid carbide 2 flute endmill to do the cutting (same as I used on the crib project). Below you can see highlights of the CNC cutting process.

After the legs were cut out, the tabs were trimmed off with a small saw and filed flush. Now it was time to make the blocks that join the legs and stretchers. The blocks are angled at 40 degrees to provide the splay of the legs. These joints are a high stress area in the design. So I did not want ot just have a butt joint and decided to use floating tenons. The joint is 5″ tall, and given that this is sort of a long grain to side grain joint, I decided to use 2 tenons per joint. I happened to have some stock pre-made for the floating tenons (left over slats from the crib project) .

The corner blocks are 2.5″ wide , 1.25″ thick and 5″ tall. The first step after squaring up the stock, is to cut the 40 degree bevels on the table saw using a hold down push stick.

The position of the mortises is laid out on the ends for the legs.

Now the router is set up in the router table with a 1/2″ carbide end mill. The fence is adjusted to match the router bit teeth to the marks on the end of the stock.

Now a test cut is made in the block to show if the cut is in the right position. Note that the blocks are still extra long at this point.

The fence is marked with the leading and trailing edges of the router bit using a squared-up block and pencil. This is much more convenient than using a square.

Once the test cuts show the bit & fence are positioned correctly the blocks are now cut to length and the positions of the mortises are marked for length. The piece is moved to the start and stop points for the cuts and the marks are made on the fence to register the ends of the piece for the start and stop positions. Each mortise should be cut in 2 passes to make it easier to tilt / plunge the piece onto the router bit and minimize burning. Note that the top corners of the feather board are knocked back to enable easier plunging. After all of the leg mortises bare cut, The fence is readjusted for the position to center the mortises for the cross bar.

Next is cutting the mortises in the legs. Basically it is the same process. The marks for the bit position are placed on the table top instead of the fence.

Now the stretcher is cut to size. The tenon thicknesses are cut most easily on the radial arm saw.

Next the tenon lengths are transferred to the tenon and the cuts are made with a Japanese style hand saw or dovetail saw.

The waste in between the tenons is then chopped out with a chisel, similar to doing dovetail pins. The corners are then rounded off with a chisel and touched up with a file for final fit.

The slip tenons are cut to length and everything is test fitted into the corner blocks.

The legs now get the edge profiles added after a light pass on the drum sander to remove the facets on the curves. . FOr the outside / front edges a 3/4″ round over bit is used. This took 3 passes to avoid tear-out and burning and sneak up on the final profile. The back edges and feet were rounded over with a 3/16″ round over bit.

Now it was time for the first dry fit assembly. A ratchet strap is used as the clamp to hold everything together. I will do the same for the final glue-up later as well.

Next will come the table top supports and slide mechanism.