Hmmm, One brake lever and two front brakes.  This needs a bit of work. I considered the dual brake line brake levers, but they don’t look exceptionally well made. I also considered dual hydraulic brakes, but I would still be stuck with the original piston in the grip and reduced braking power. Using caliper brakes linked together was rejected mostly due to structural issues (long support arm for the brake). This left taking good mechanical disk brakes and linking them together. So, I settled on a new set of Avid BB-7s and 160mm rotors.

Looking over photos from the web I saw a variety of ways of linking up the brakes that were either needed some aesthetic help (big assembly on the handlebar),  were mechanically unsound ( lever system with then unequal pull on the 2 brakes) or overly bulky. So I settled on a system where I would use an aluminum block to attach the 4 brake cables : two to the brakes, one to the handlebar and one reserved for the yet uncompleted parking brake.  In the photo below you can see the bottom section of the block. It is made form 3/4 x 1/4″ aluminum stock. The holes for the brake cables on the left are drilled 7mm in diameter and he grooves were cut with a slitting saw, although the band saw or hacksaw would have worked as well. You can see that the exits are a bit too close together. I made the bracket before the adjusters arrived and the closest they can be set is about 12mm / 1/2″ on center. So the holes and slots should be a bit further apart to minimize friction on the cable entry to the adjusters.

Here is the view from underneath the frame. The “combiner block” assembly is really not visible from above. 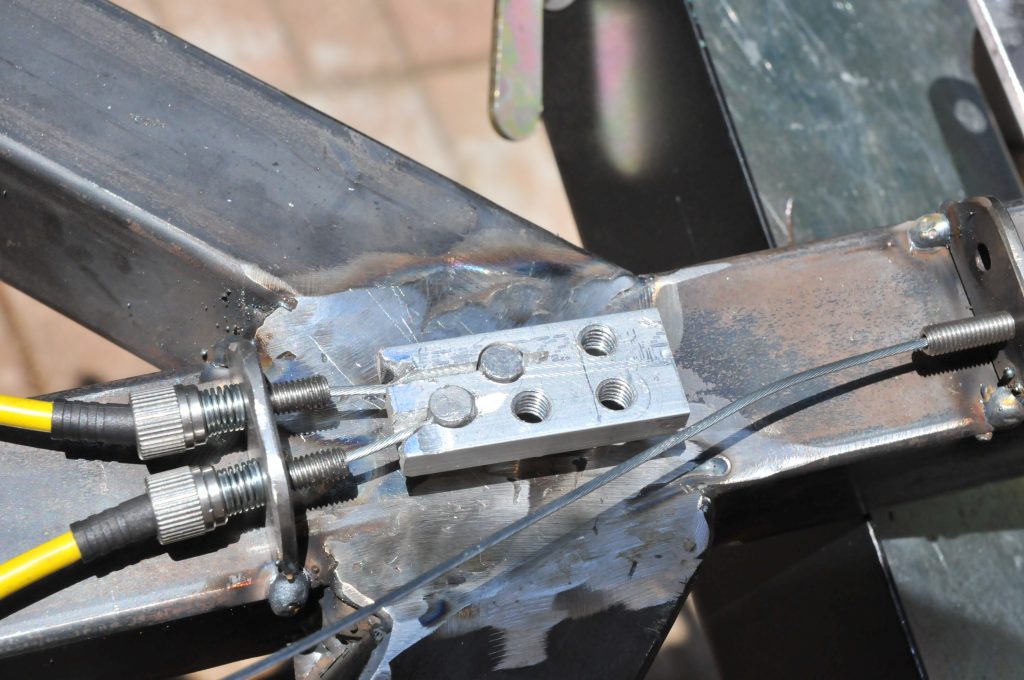 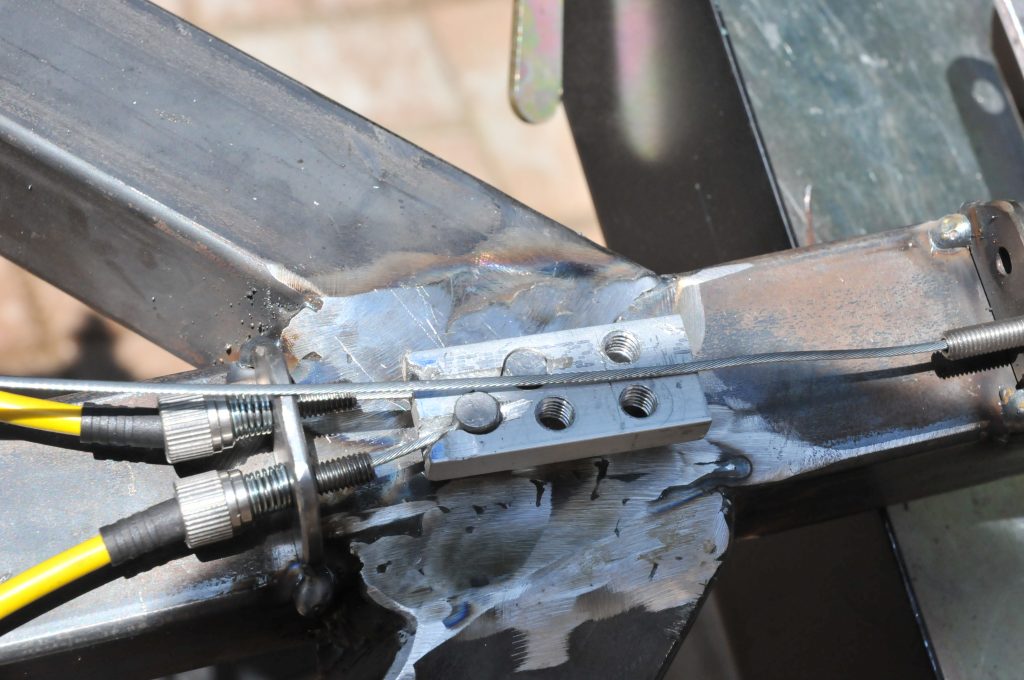 Now it was time to add the cover plate. This serves 2 functions: retaint the outbound brake cables and clamp the inbound ones from the handlebar and future parking brake. You may ask how it retains the outbound cables? This is due to the slots not being cut all of the way through. The “dumbells” on the ends of the cable drop into the, holes after a bit of filing, but are prevented from falling through by the slots for the cable only being about 2/3 of the way through the block. 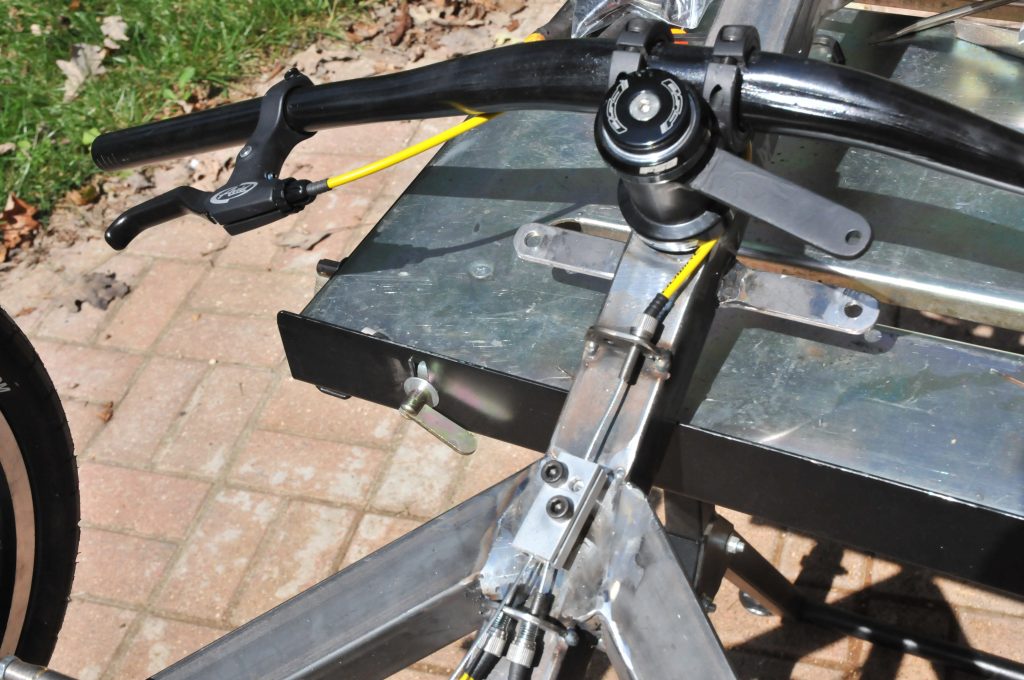 Next was getting the brake line sleeves properly run and not rubbing on anything. 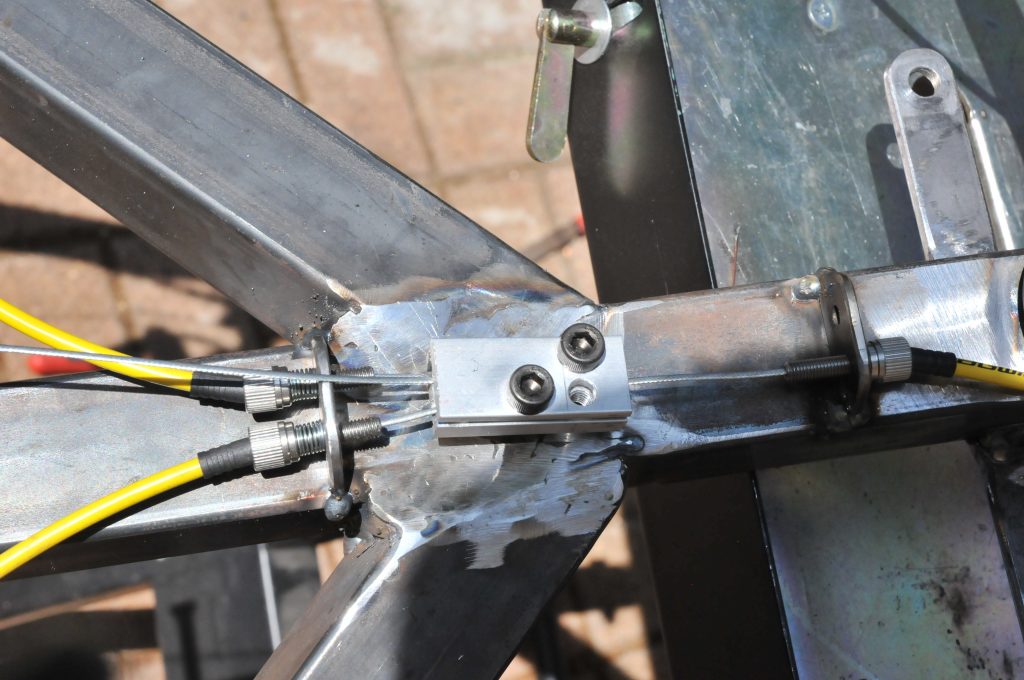 I had to turn down the heads of the screws to get the 2 to fit next to each other. You do need all 3 for clamping pressure. 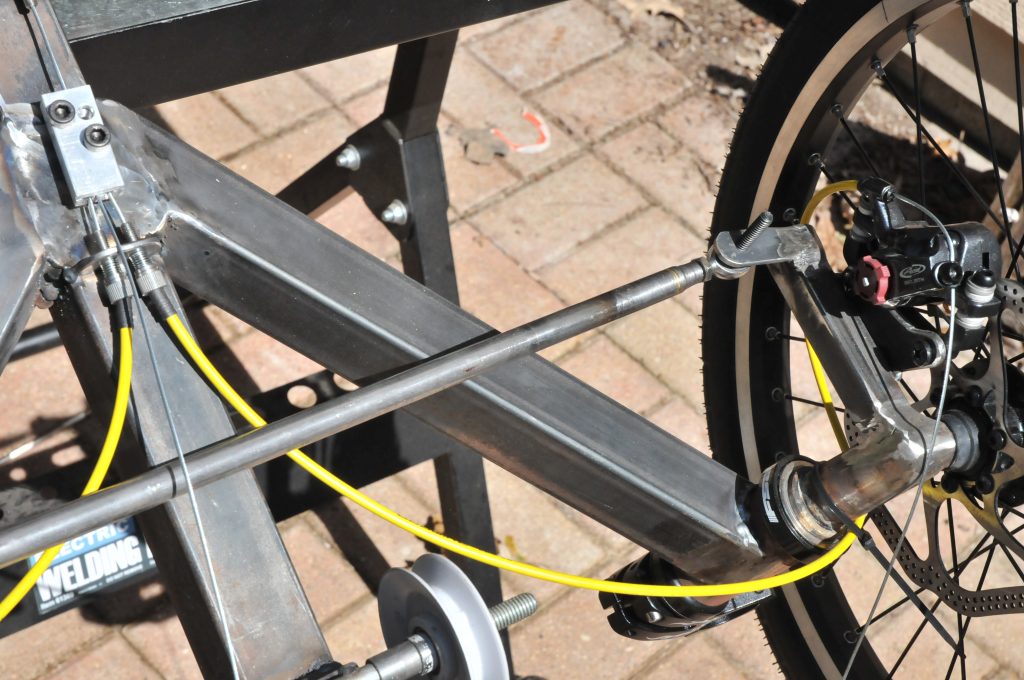 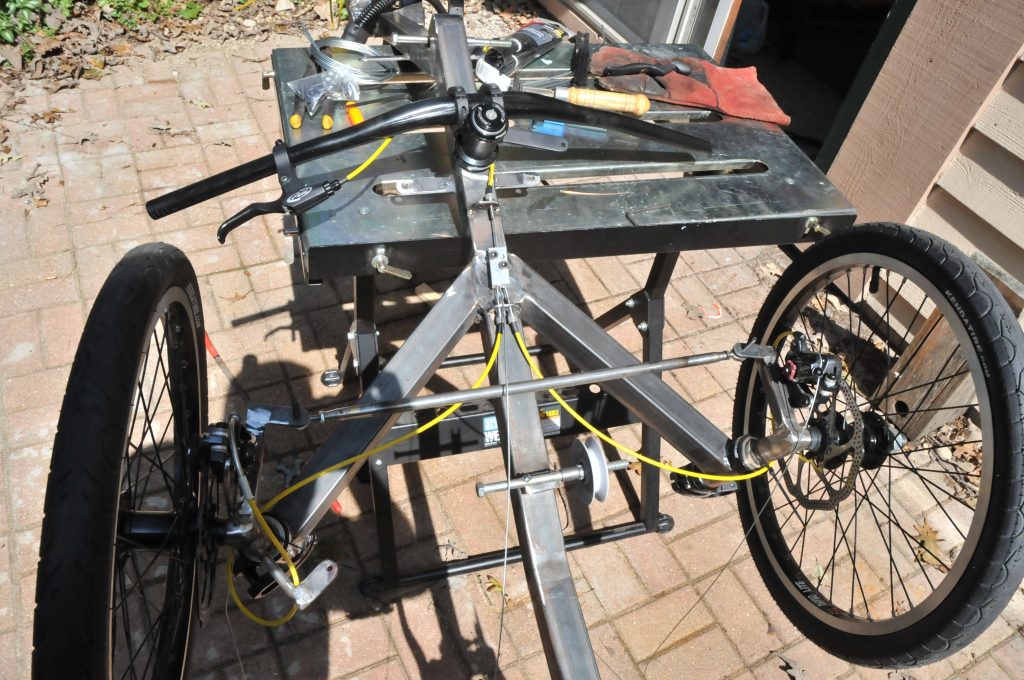 The long bolts for the chain idlers were trimmed off and the spot welds made firm. 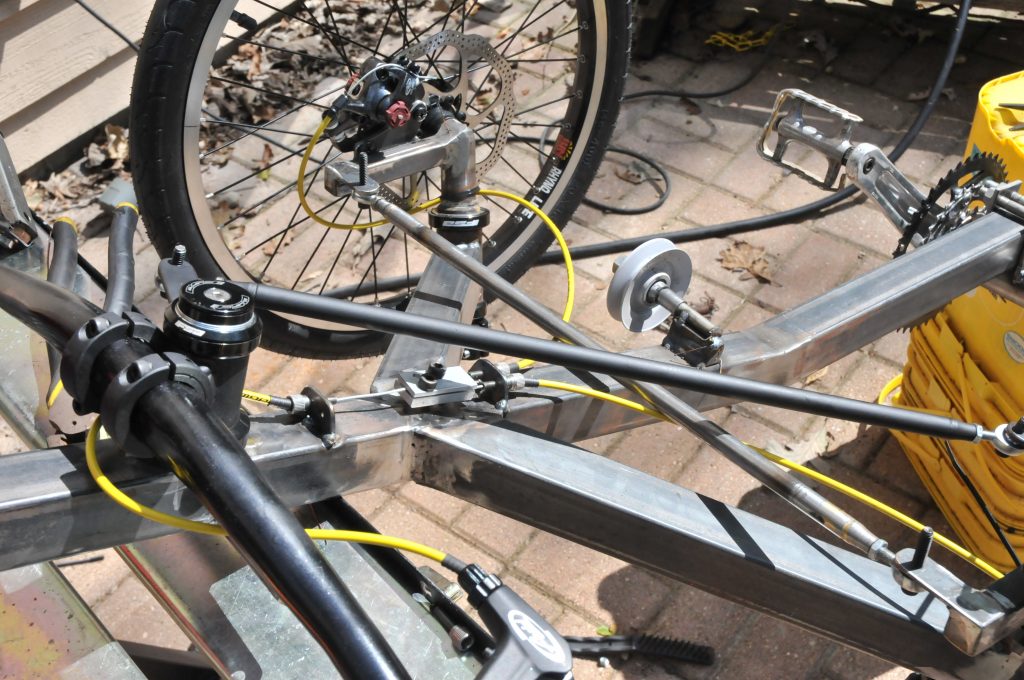 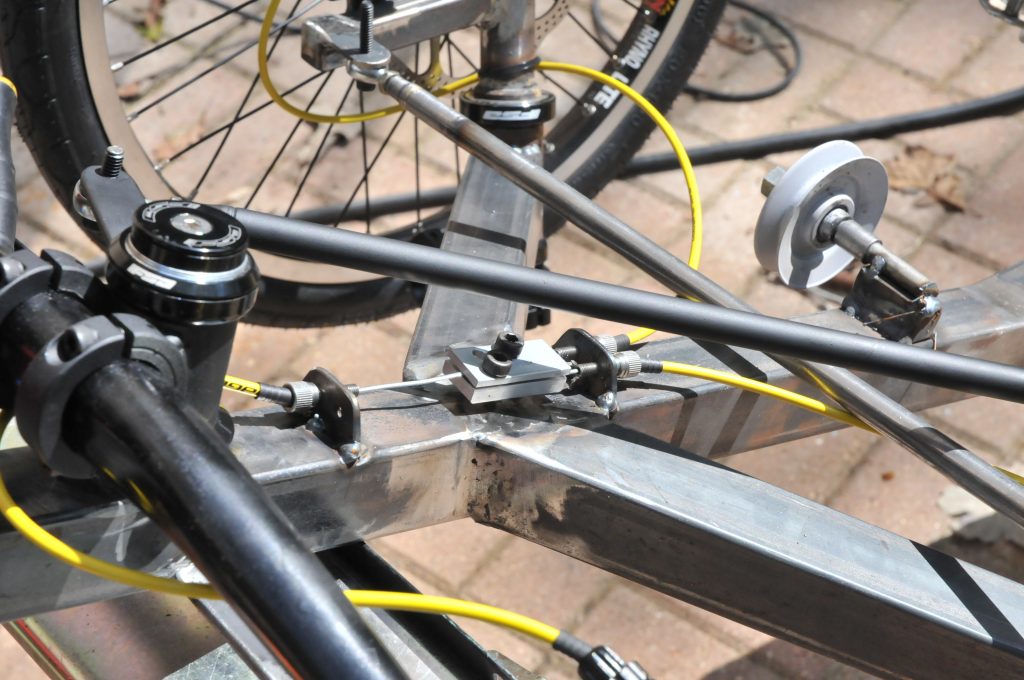 After this the chain was run and the inelegant but practical garden hose return run was mounted. The chain run actually takes nearly 3 full chain lengths to cover the distance. I used SRAM PC971 chains for this (at $20 a pop)!  I mounted the chain and set the length per the Sheldon Brown recommendations. The front derailleur is not yet mounted, so I will need to see if I truly have enough take up for the lower gears. However at this point I should only need to shorten the chain rather than lengthen it and I was using a used chain for the 3rd one, so if it ends up looking like confetti, so be it.

With steering, brakes and propulsion hooked up it was time for some test drives. I double checked the brakes and steering connections and was ready to set off down the driveway (which is steep) and for a cruise around the neighborhood.

The shifting was not perfect and I nearly got hung up in high gear – yes I should have set the derailleur end stops. I was riding around the neighborhood at a nice clip, looking ahead and I became thankful that I was wearing underwear otherwise the neighbors would have had quite a  show with my shorts billowing upwards in the breeze (not a problem on a regular bike). The handlebars were not quite tight and I got them set to a comfortable.   On the way back, I was dismayed that the pedal resistance was higher than expected.  I then stopped at the bottom of the driveway and pushed the trike up – remember I have no low gears without a front derailleur and on my road bike I am normally in gear 1-3 on the way up.

At the top I tighten the handlebars and notice the front wheel hub nuts are loose. No wonder the resistance increased and thankfully it must be pretty hard to lose a front wheel with disk brakes.  So I tightened the hub nuts and added the jam nuts.  I also fiddled with the toe in of the front wheels to minimize the steering twitchiness I had been feeling.  Now it was time for another test.   This time speeds were up and steering settled out.

Now it was time for the kids to come over for Labor Day dinner and I had prepared another big batch of smoked chicken.

After dinner it was my son David’s turn to try the trike. He took it on the same route, and came back with a big smile and started up the driveway (remember I said it has no low gears). He gave it a valiant effort and made it half way up.  Now he was stuck. Cnt go forward, and really can’t get off either, for as soon as he lets go of the brake to swing his body up forward to get off, the trike slides back down the driveway (hence the need for the yet unfinished parking brake).   So rather than risk having a father-less grand-daughter, I go to rescue him and prop my leg behind the trike while he gets off .

All in all, it is a success so far, but there is still more work and fine tuning to go.