We have been doing spatchcocked chicken, turkey, & cornish hens for a few years now. This past year we started getting food from Imperfect Foods as an alternative to going to the store. One of the times, I missed that there was a butternut squash on the order and it came. I am NOT normally a squash fan. In my family, it was always sweetened and served as squash mush. However, one day, we had the extra squash, some monster shallots and a whole chicken (and it was decidedly not nice for grilling outside). So I decided to try using the squash as the star under the bird rather than the more traditional stuffing, potatoes or root vegetables. It was a hit!. We have repeated this a few more times to make sure it is a repeatable recipe and we still love it.

1 butternut squash, peeled, seeded and cubed into 3/4″ pieces. COmpost the stringy stuff but add the seeds back in with the cubes

In a bowl place the above items and sprinkle liberally with granulated garlic, Penzey’s Seasoned salt and fresh ground black pepper. Mix well and dump into a oiled (or non stick sprayed) 13×9 or better larger glass baking dish. Keep the pieces towards the center as you want it all under the chicken.

Take a 3-4 lb chicken, clean out the cavity, remove excess fat and slice down the backbone and also the keel bone. Flip over and press flat (it should make some vicious crunching noises in the process) .

Place the chicken on the veggies. Spinke with more granulated garlic, Penzey’s seasoned salt, pepper and some rosemary sprigs

Bake at 400 F convect for about 45 minutes, until a probe in the thick part of the thigh reads 170F. Pull from the (now well splattered) oven and let rest for 15 min. Beat off the crispy skin thieves with a thick spatula (BTW the skin off an entire leg does not count as a schnibble). Slice and serve. 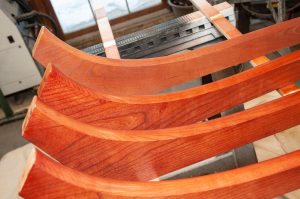