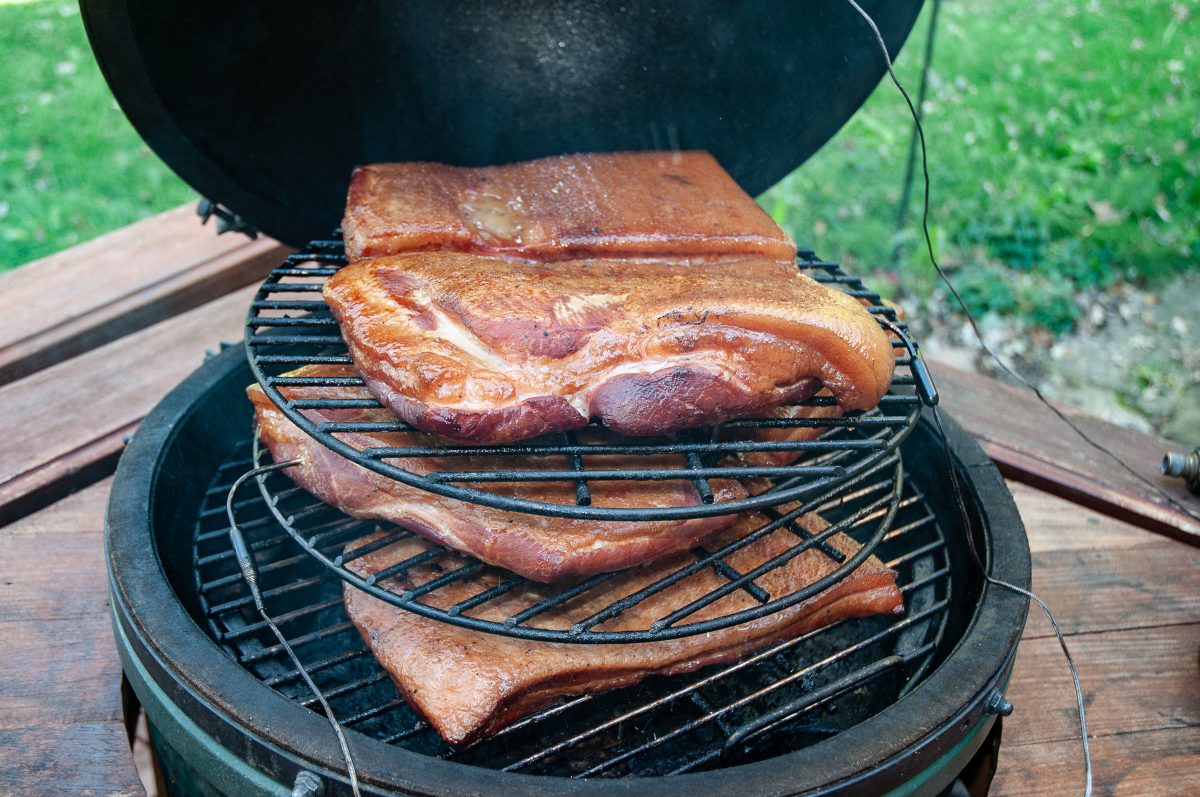 We had been searching for a lower nitrate bacon alternative. This is due to the nitrates combining with the meat and forming nitrosamines when cooked at high temperatures (e.g when you cook the bacon until crispy). The so called “uncured” bacons that we had found uses celery juice or extract rather than Sodium Nitrite.  However celery is very rich in naturally occurring nitrates. The uncured bacons with the celery  in many cases have MORE nitrates in them than  than those made with sodium nitrite! See this article where it was quantified. https://www.cooksillustrated.com/ho…/5734-nitrate-free-bacon.

We also prefer a less salty bacon and with a mild smoke flavor such as from apple or cherry.  We have an abundance of cherry wood for smoking.

So I did some research, on the web, bought the book Charcuterie by Michael Ruhlman, and talked to co-workers. Finally, I was confident I could do this and set out to buy some pork belly (where did I see it in a store last?).   After a few false leads I ended up at a small local grocery with its own butcher shop – Panos in Waukesha.  There I procured an 11 lb slab of meaty pork belly – skin on.   I took it home and the skin came off without too much trouble.  I tried making chicharrones but that was a disaster.   However the bacon turned out great!

One of the important things when curing meats is to do everything by weight, not volume. The density of salt can vary by two to one (e.g table or canning salt vs a coarse kosher salt.  I dry cured the bacon for a week before smoking.  The cure recipe below has far lower levels of nitrite than any of the recipes I found on the web. The justification for the lower level still being safe is the bacon will be cured in a refrigerator, hot smoked and then eaten quickly or frozen. This minimizes the chances of botulism growth.  I would not try this low a level for a dried salami or other products cured at room temperature (but those are not generally cooked crispy either).

This was mixed up and then applied to the meat. I had 2 pieces 1.9KG and 2.2 KG which used 70g and 85g respectively (approximately 1/4 cup) .   The cure was rubbed in well. The balance is in a jar waiting for the next project.

The smaller piece was to be spicier.  TO this I added the following:

1.5 tablespoons black pepper coarsely cracked (next time I will double this)

The spices were mixed and then rubbed all over the piece.

The bacon to be slabs were placed in glass baking dishes and covered with plastic wrap and then put in the fridge in the garage. They were turned once a day. The weather was unseasonably cold so the fridge temps were probably lower than planned (26 degrees when I inserted the probes for smoking).  There was not much liquid given off.

The night before smoking, the bacon was rinsed well and then placed on skewers over the baking dishes and returned to the fridge uncovered. This allowed the outer layer to dry and from a pellicle which helps the smoke penetration.

The Big Green Egg was fired up and set for indirect heat. 2″ thick chunks of cherry branches were placed on the charcoal. The Heatermeter was set for 205 degrees. Temperature probes were placed in the thickest part of each slab.  It was a very windy cold drizzly and snowy day  (good thing the Heatermeter case is waterproof).  When the meat hit 130 degrees I rotated each by 180 degrees so the outer edges would not get too done  as the slabs filled the grill and were not entirely shielded from direct heat.  At 3 hours the meat was 150 to 175 degrees and the smoker temp was rising due to the high winds (I don’t have a damper on the fan yet) . So I pulled the bacon off the smoker and put it back in the fridge. 150F for an hour is ideal .

This bacon is great. The right level of salt and spices and very meaty. Nice pink color even with the low nitrite level. I had taken a few strips the night before smoking to taste and make sure it was not too salty . However it did not fry up near as well as the smoked bacon.

Teal and I like both flavors and the savory one will be great for salads, BLTs, etc. The bacon cooks up very crisply.

At the moment the house smells like a good old fashioned butcher shop and smoke house – yum.

We got a new meat slicer for this and other cooking projects. It worked like a charm. So easy and consistently thin slices (the way Teal likes them).   Of course you could slice by hand especially if you like thick cut bacon. It will just take longer and you would probably want to slightly freeze the meat before slicing to firm it up even more. 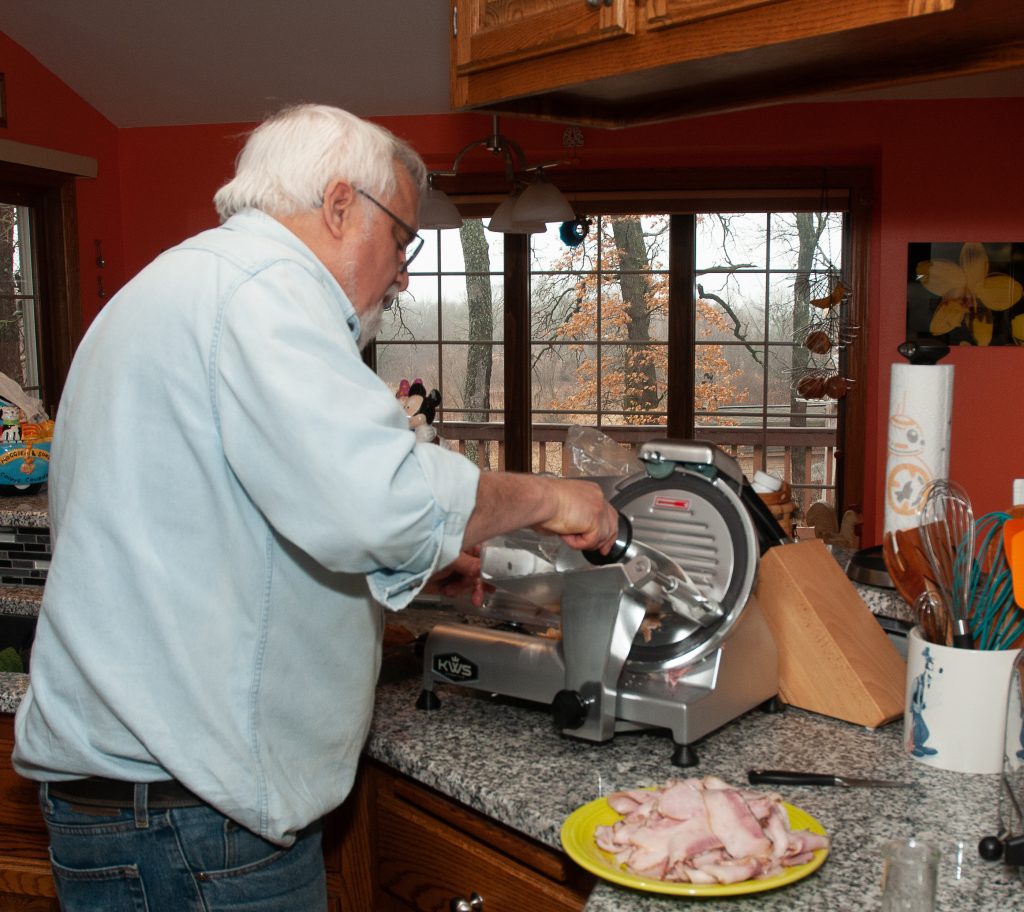 The bacon was then divided up and vacuum packed for freezing.  We ended up with almost 8 lbs of finished bacon.

This is definitely something we will do again. There is not a huge amount of applied time involved, but you do have to wait for the meat to cure.  Not hard and a great payoff. While the bacon was smoking, David and I also brewed up 2 batches of beer .  Teal was very patient with us and helped out as well.

We have bacon that tastes great and we know exactly what has gone into it.

Next I wonder about doing some pork loins for canadian bacon. They were on sale last I looked.