Building out the drawer boxes 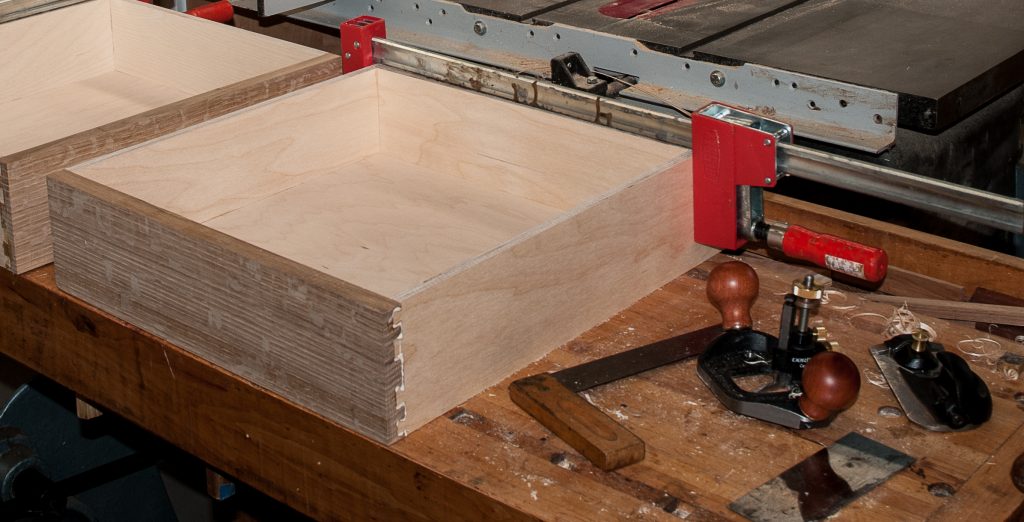 There are many ways to build the drawers. I have settled on a particular technique for the furniture I build which provides what I think is a good combination of elegance, ruggedness and reasonable ease of building. This combines dovetails for the fronts, dadoes for the backs and bottom. The bottom is also completely captive which helps square up the assembly.

Once the dovetails are cut in the sides and fitted it is time for the easier tasks. The first is to cut the dadoes in the sides for the backs. I typically set this up on the smaller radial arm saw using a 8″ Freud stack dado set. In this case the plywood is 12 mm thick which requires almost all of the shims in the set. The dado depth is just under 1/4″. I leave 1/4″ of wood behind it which makes measuring for the bottoms easier (outside box dim – 1/2″ = the bottom dimension). 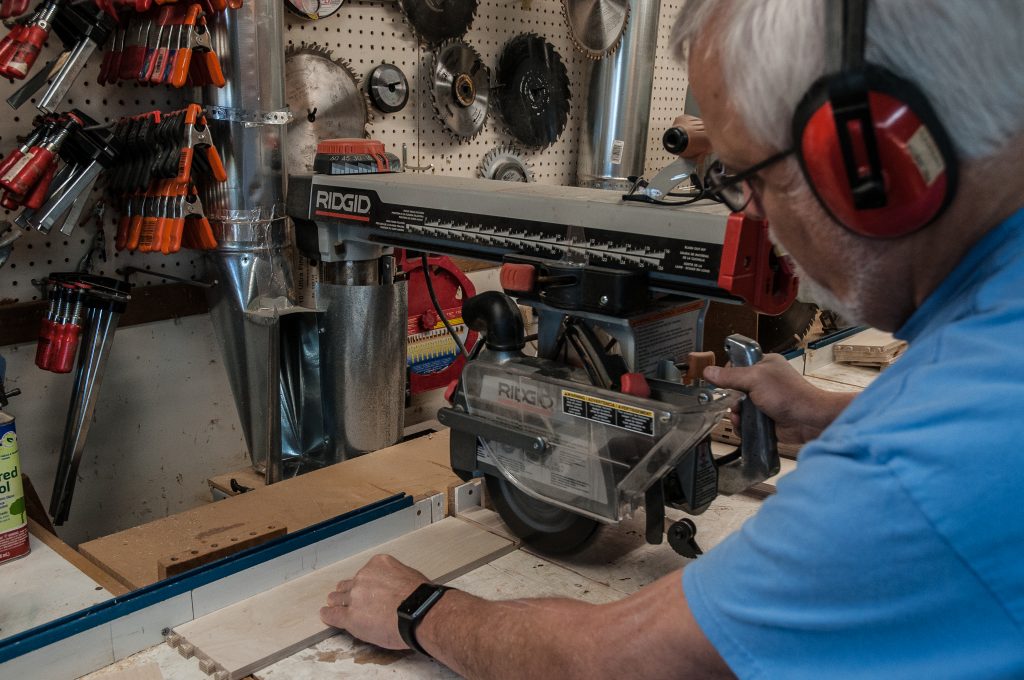 The backs are cut to length on the big radial arm saw, again using a stop.  When cutting the fronts and sides to width I cut 2 extra strips of plywood, ready for the backs. Plus the backs are shorter than the sides so I could re-cut some sides where the dovetails were messed up. 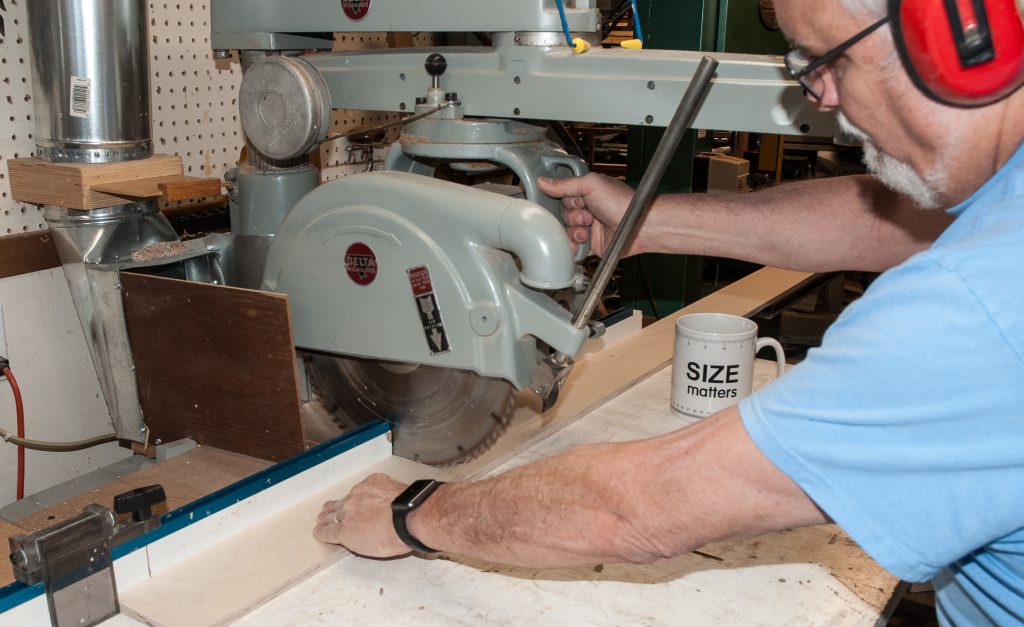 Dadoes for the bottom panels

The key point in setting this up is that you want the dado ends to be under the side dovetail tails . This will completely hide the groove when viewed from the outside.  The photo below shows the alignment of the first cut which will be the top of the dado. 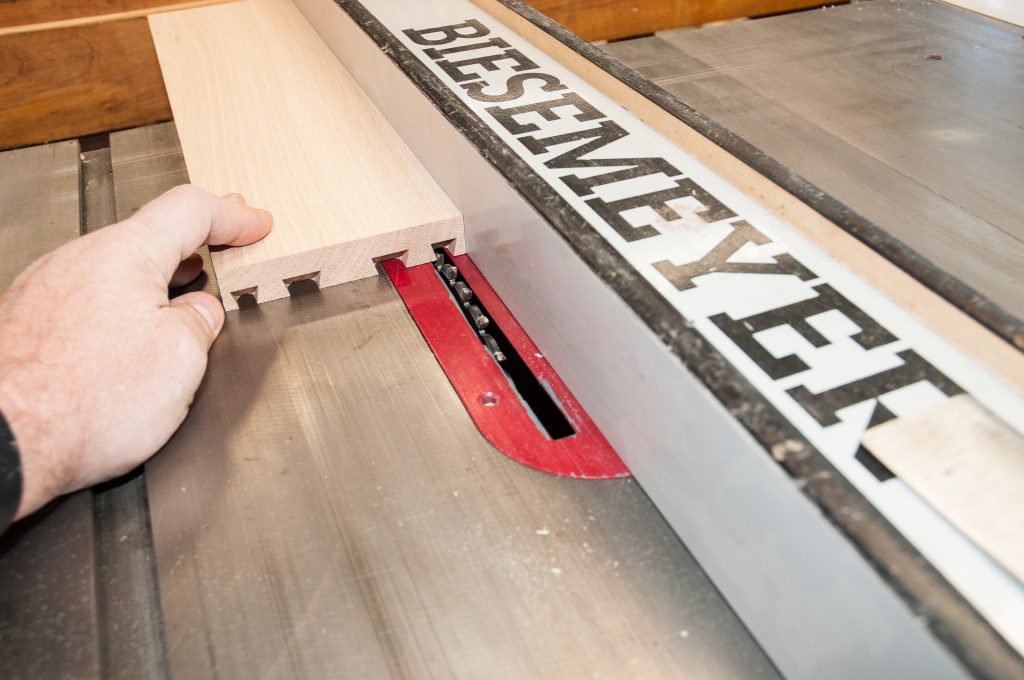 At this point there is a lot of time invested in the sides. Cutting the dado incorrectly will ruin a side. So I carefully double check the orientation of allof the pieces and stack them so they are ready to slide against the table saw fence.  This reduces the chance for error vs. “flipping on the fly”. 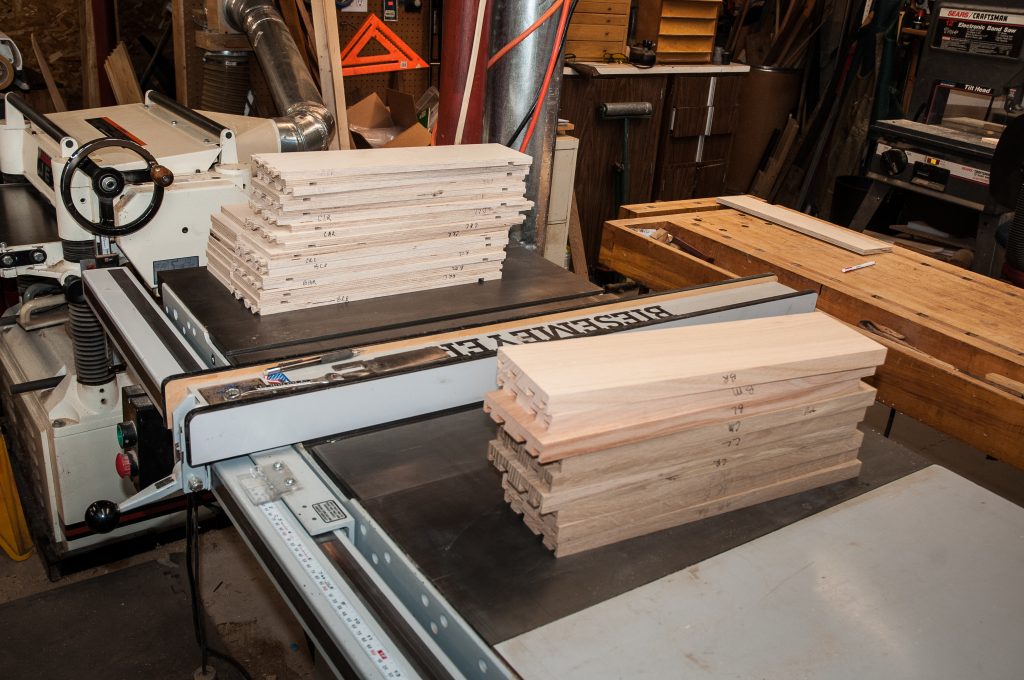 Once all of the sides, fronts and backs are cut make a few extra test piece cuts.  The alignment of the fence for the second cut takes a bit of trial and error until you get a good sliding, but not overly loose fit on the plywood for the bottoms.  I tend to re-use the test cut scraps multiple times. 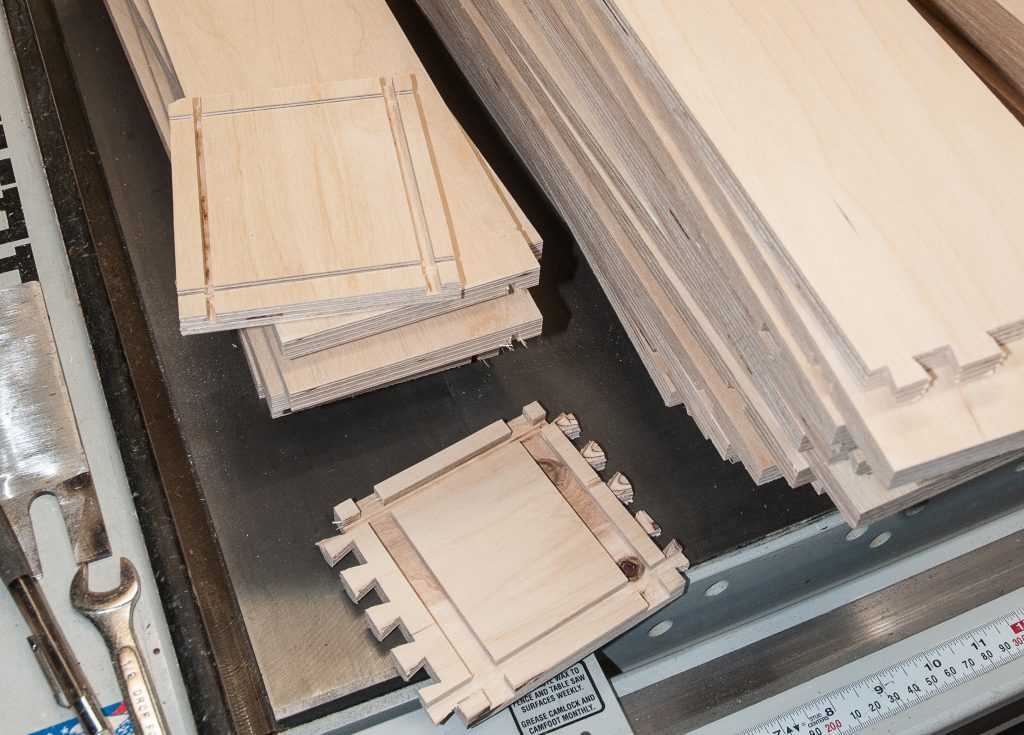 Now adjust the fence, make the test cuts and test for fit against the plywood for the bottoms.  When making the cuts, be sure to hold with even pressure so that the piece does not ride up over the blade, reducing the depth of cut. I often will use a top feather board for this but skipped it this time, which resulted in some extra fine tuning at final fit-up. 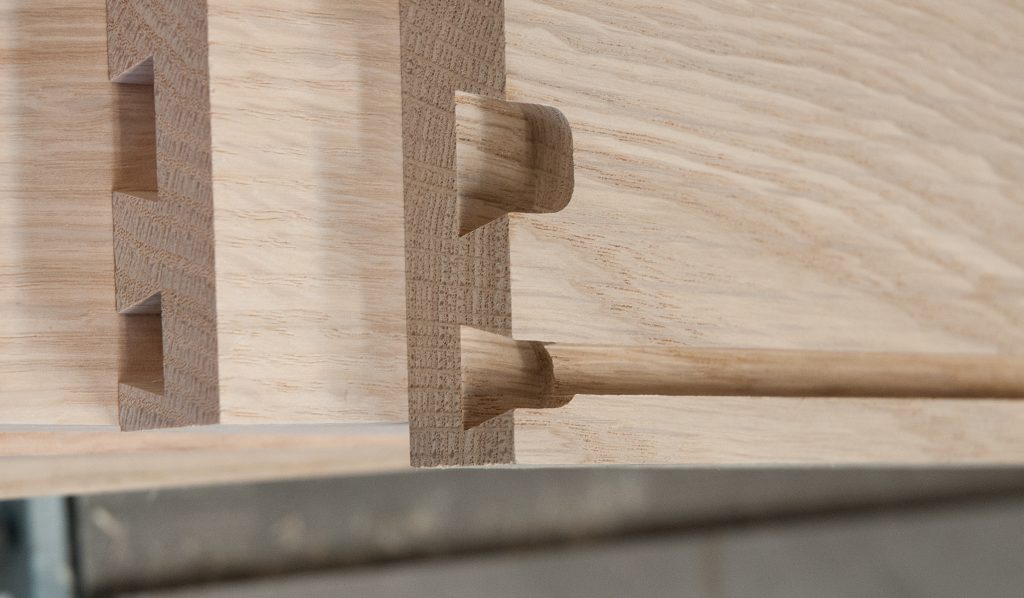 I will completely dry fit assemble each drawer before gluing.  This gives me a final chance to fine tune the fit of the components. I can adjust the dados with a chisel but prefer a dado plane and side rabbet plane as shown in the photo below.  Scrape or sand off any marks on the inside faces of the drawers at this point as it is far easier now than when fully assembled.

If fitted properly the dovetails need no clamping. The only clamp required is for the backs. The drawers are all placed o stacked flat to prevent racking and are checked for squareness. A few taps with a mallet will usually fix any minimal out of square.  Look up and down the dovetails after assembly making sure the sides / tails are evenly inset for the full height of the drawer. The fronts will be trimmed flush with the sides after the glue dries.   I will clean up the glue squeeze out after a few hours. This makes the least mess.

So 9 drawers done, and 18 to go for the dresser project. 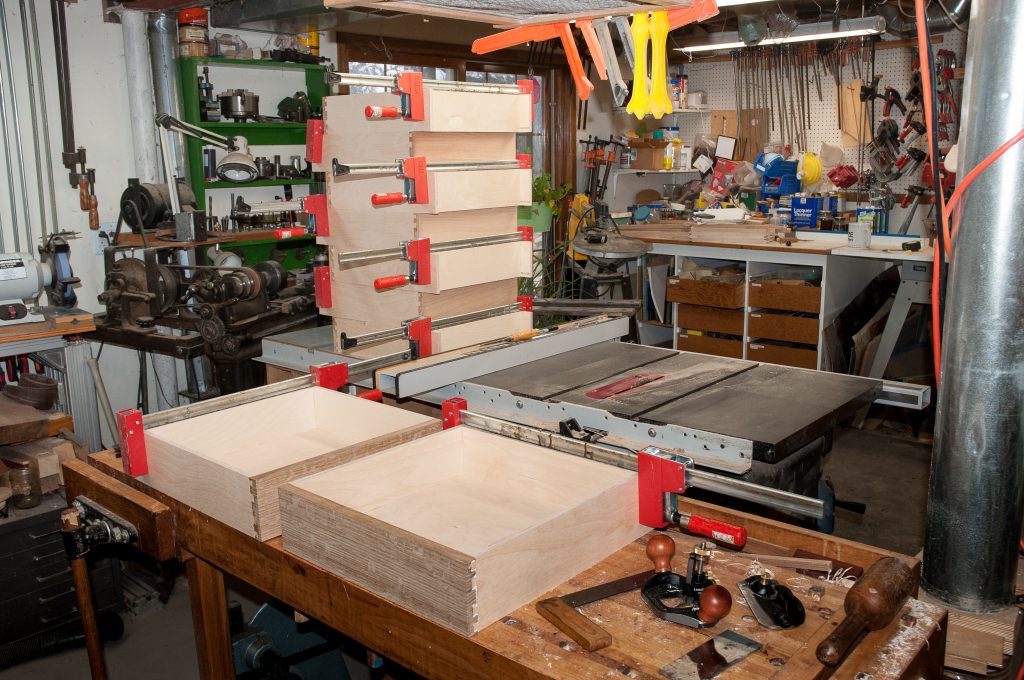