The CNC router has achieved functional status. That is I can now with modest effort actually make useful things. These can be furniture pieces or parts for the router or other tools. One of the hard parts has been zeroing out each of the  axis. X and Y i have been doing with a standard […]

In October of 2105 we went to Indonesia with the group from Underwater Connection. The primary destination was Lembeh Straight. Lembeh is well known for what is often referred to as “muck diving”. It is really that you are diving on a black sand bottom. The depths are typically quite shallow (<30 feet) and visigbility […] 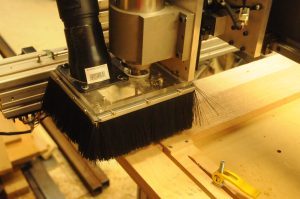 With the CNC router basically running it was time to clean up the rats nest and get the cooling loop completed for the spindle. This would have to be redone later due to the fluid lines collapsing in the cable chain. The PC monitor is mounted on the wall and the keyboard and mouse are […]